So we finally got a bus to leave Rantepao and head to Makassar. This town was to be our gateway to the Moluccas’. Makassar is for me a town best forgotton. Maybe the nonstop rain effected my perception of the place but I found it to be the most depressing place we’d been on this trip. It is a dirty, over populated town filled with bad tempers, sleazy men and uninteresting buildings. Even the point of interest that is Fort Rotterdam was unappealing and forgettable. Also this is the first place I didn’t take any photos at all but we did get cheap flights to Ambon.

Touching down in Ambon we were greeted by blue skies and sun. We had made it to the Moluccas’, the famous Spice Islands. In the past the nutmeg famous islands had been fought over by many countries, including the Dutch, English and Portuguese. While in Ambon we meet many locals who have relations living in the Netherlands, for me it was funny to be asked did I live near Houten as three separate men had family living there, one even said it’s near Amsterdam and some small village called Utrecht. That comment was from the Ojek driver who couldn’t understand my laughter. For the people back home, an ojek basically is a motorbike taxi; they are sometimes the easiest way to get around. In Ambon there is still a heavy military influence which is seen by the many barracks around the place. These are constant reminders of the religious troubles of about ten years ago. One of the days a truck driver brought us into town from our hotel, he was a nice guy who picked us up on the road when he saw that we would be waiting a while for a local minivan/bus. His first question though was about our religious beliefs and he proclaimed us to be good people because we weren’t Muslim….so the religious peace is for appearances after all, it was a strange talk but we got into town to book our pelni tickets. Pelni is the boat company who would take us to the Banda Islands. Not much else to say about Ambon except that one of the cafes was quite funny with its décor. It had many photos of famous Moluccans, to Arjan’s happiness there were many Feynoord players and to his dismay there was also a poster of the vengaboys……he really wishes they weren’t Dutch….lol. 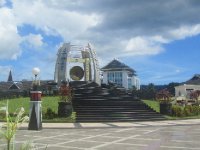 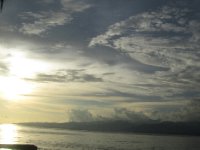 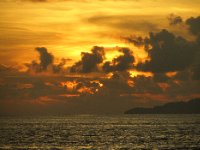 So the Pelni boat. We had managed to get a first class cabin and were very happy for this. We had heard some stories about this boat from Juliette and Peter and none of their stories were exaggerated. The boat is huge and looks like it is the titanic. There are people everywhere, piled on top of any available surface, the stench of human sweat and urine is over powering as we battle our way to our cabin and thankfully close the door. We met Abba who owns one of the guest houses’s when we were getting on board. He helped us reach our cabin and get on board as easily as possible, but still we end up covered in bruises from the elbowing of people and bags. We walked around the ship after we stored our bags and were glad that we paid the extra money for the air conditioned cabin with beds and private toilet. We heard from Abba that there had been boats rescheduled so that this boat had the equivalent of nearly three boats passengers.

While in Banda we choose to stay at Vita guesthouse, it’s beautiful to watch the sun set with the volcano Api towering over us with a cold beer in your hand while sitting on the pier. Having dinner at Abba's guesthouse meant having tasty food and combining the best of the two places. My favourite part about Banda is the snorkeling. It is here that I saw my first shark!! It was a black tip reef shark of about a metre long. We also saw a school of double headed parrot fish, many napoleons’, barracuda’s and triggerfish. Ah triggerfish, now they can be quite scary, their teeth are so sharp that they can bite through coral and well it turns out that if you swim anywhere near their nests, which you can’t see, they tend to attack. Yes, you guessed right, I made the mistake of swimming too close to a nest, according to the books their zone for protection is in a cone shape that expands as it reaches upwards. While swimming and stalking a ‘nemo’ fish I felt a tug on my flipper, turning around I saw a trigger fish bearing its razor teeth menacingly at me. I swam a way but it kept coming for me even when I tried to scare it with my flippers so I turned to the girly girl approach and screamed to Arjan for help. After his second attempt to scare it away it finally left us in peace but damn that kind of freaked me out for a few minutes. That happened at Pulau Ai, hmmm I preferred pulau hatta, the visibility there was better and the variety of fish amazing, besides it was wear I saw my first shark. Really it has nothing to do with scaredy cat reactions to trigger fish, uh huh. 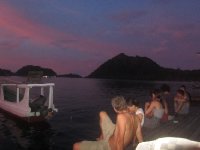 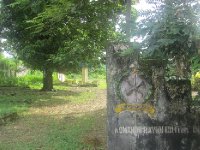 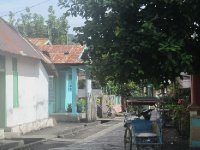 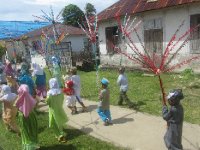 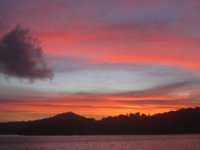 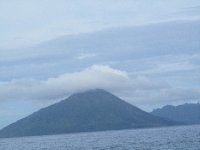 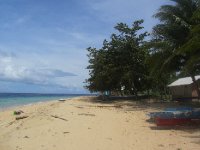 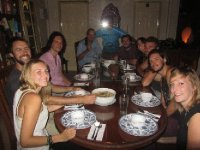 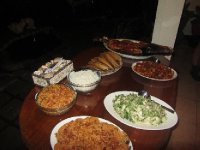 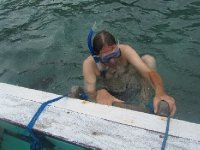 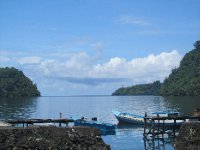 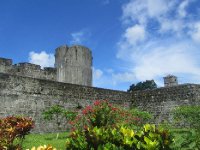 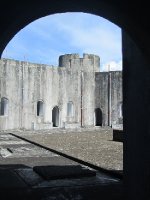 After Banda we headed back to Ambon for one night before flying to Kalimantan. Yes, we were finally on the island for Orangutan’s, one of the animals that Indonesia is most famous for.

Posted by Rraven 17:28 Archived in Indonesia

Previous Next Table of contents

This blog requires you to be a logged in member of Travellerspoint to place comments.

If you aren't a member of Travellerspoint yet, you can join for free.