So now it’s time to talk about some of the local traditions. Toraja people are kind of known as the hillbillies of Sulawesi, they hold elaborate funerals which can last several days. I don’t see them as being of lower class the way some locals do. Out of all the towns we have been to in Sulawesi, this one probably has the highest concentration of people who speak several languages, with English being their main second language and sometimes Dutch and German. They have a funeral when the person dies and then a more elaborate one at a late date. The length of the funeral and the amount of animal sacrifices give an indication to the stature and wealth of the person and family. On New Year’s Eve we attended our first day of a funeral. The funeral itself was for a local well know dignitary who had died two years ago, his family had his body embalmed and it sat in the family house until the preparations were complete. This is normal in this area. We had been told that this funeral was a very special one and one of the largest ones in a long time. The whole funeral was from Dec 26th to Jan 5th. It would last most of the xmas holiday. On New Year’s Eve there was the acceptance of the guests which was the first day we attended. This involved processions of the family, close and distant, neighbours, and friends. The main people in these processions wore traditional clothing and were ornately decorated.

All guests are supposed to wear dark clothes which are similar to other religious beliefs but you are also supposed to bring a gift. The guidebooks all suggest sugar or cigarettes but when you talk to locals and the official tourist information office then you are told to bring a carton of cigarettes. We have heard many tourists say they don’t want to encourage smoking but for me this is not a big deal. I’m not a smoker but don’t feel the need to lecture someone else. The cigarettes are an important part of the ceremony as they are offered to other important guests as openings for meetings. At the funeral we attended there were public agreements from people to build roads, improve houses, the resolution of family feuds which had lasted for years and many other promises. When you get to the ceremony you are presented to a part of the family, it is the head of this part that is the receiver of your gift, in our case; it was one of the sons of the deceased. While we sat in a structure that was built for the funeral we could see an overview of everything that was happening. We were sitting in a traditional looking structure that had two levels; there were about 50 of these structures in a square to create an event area. Normally these structures are created for the funeral and afterwards they are taken down. In some towns this didn’t always occur as the structures were handed over to the community for housing. It’s obvious to see at the ceremony why the towns hotels and accommodation were so busy with local visitors, it seemed like there was 100s of people at the funeral, we heard people had flown in from all across Indonesia, also with family members coming in from abroad, the Netherlands, Australia, etc…. In the event area the squealing cries of pigs punctuated the air which swam with the pungent smell of blood. The ground was muddy from the rain and the stamping of people and animals. Only a couple of feet from us there was buffalo being slaughtered. A man would hold the buffalo by a rope which was fed through the nose, the animal sensing what was happening would pull backwards which would mean that the neck was stretched and ready for the knife to slice the last breathe out of the animals. Unfortunately this didn’t kill the animals instantly; the animal would fall to the ground or try to run while the blood spurted forth out in a strange decoration on the mud. Sometimes a second or third stabbing would have to occur for the animal to finally be allowed to rest. Through this the crowd would shout their approvals. Over the course of the whole funeral we were told that about 200 buffalo and many more pigs would be killed.

That day we saw about twenty being killed. We left the ceremony and headed back to town for food, while some of us chose non meat dishes, Arjan chose a local specialty dish. It’s too easy after all to forget that just because your meat may have come from a supermarket that it was originally an animal. I just like to think that they didn’t die for a show of wealth. Buffalo can cost locally on average around 25-35,000,000rp with the sought after white/pink buffalo with the black spots being killed for 300,000,000 rp. Again we’re back to 200 of these being killed. Our guide had told us that the meat would be divided between the locals but that still there would be far too much meat to be consumed so some would be dried out for later use.

Our second day of attending the funeral was on Jan 3rd, this day was being celebrated with buffalo fighting. A specially constructed arena had been created for the event. Some of them had serial numbers on them while others had been given names or adorned with football team tribute names. The buffalo were being cheered whether they fought to the death or was just big enough to frighten the other buffalo into running away from the arena.

The third and final funeral day for us as part of the event in Sereale was on the 4th, this was the slaughtering day and the end of the events as such. There are not enough words to describe the blood bath of carnage that we saw. Whereas on our first day the animals were killed quickly, this was no longer the case. This day was all about the performance and show. Again they would slice the neck of the buffalo but this time not as severe as before. It was enough to weaken the frightened animal; they would then let the animal loose to run through the arena which is filled with dead animals and other animals awaiting their futures. Many times the buffalo would escape into the crowd sending people running to all sides for safety. So though I wanted to leave at this stage, well we safely couldn’t. We were on the scooter and didn’t feel like taking the risk of having a terrified dying buffalo chasing after us. We moved from our side view to stand on one of the platforms, this was a safer place to wait it out and to watch with morbid interest the rest of the killings. 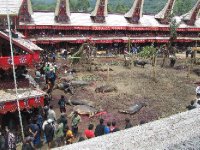 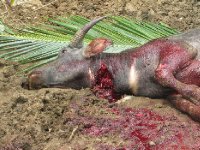 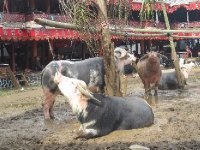 I understand that the local belief is that the deceased will need the same possessions in the next life and for this the animals are slaughtered and sent with him/her to the afterlife. This story gets tainted though when you are told that it also means the rich in this life are presumed to have the same standing in the next life and that more animals must be killed. Talking to one local woman was an eye opener. She doesn’t believe that this has anything to do with beliefs but more to do with showing off, like burning money because you can afford to. She finds the whole tradition to be embarrassing but when asked would she take a stand, she said she would like to change hers but then if everyone changed you would have less tourists and income for the locals so she would keep it alive. The tourism in the area is also for the traditional houses, the old graves (some hang in trees, some are in caves and some are carved into rock), for rafting and for hiking through spectacular hills/mountains dotted with rice fields, traditional buildings and ancient stones. But I have to agree, though we may have still visited here to explore the countryside, it was the strange funeral traditions that piqued our interest to visit here.

As the town was so busy with visitors for the funerals and Christmas visits a lot of the buses were prebooked with people leaving so we had to stay a few days longer then originally planned. This worked out well as we had a better opportunity to explore the area and get to know the locals. The people were very friendly and open. We hired a scooter and spent our days looking at old sites and walking. the surroundings are beautiful and though are time there was longer then planned, it wasn't boring. 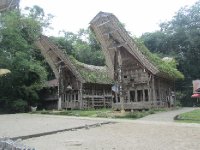 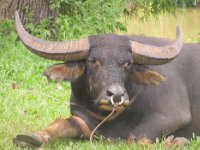 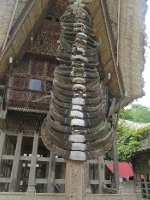 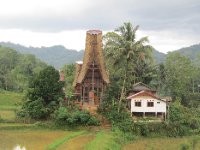 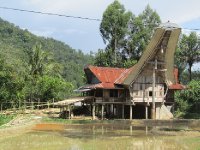 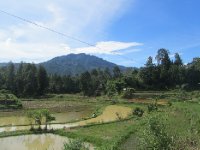 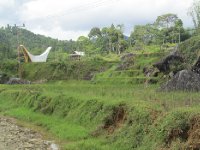 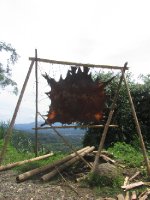 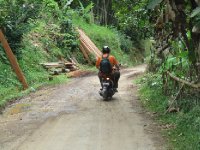 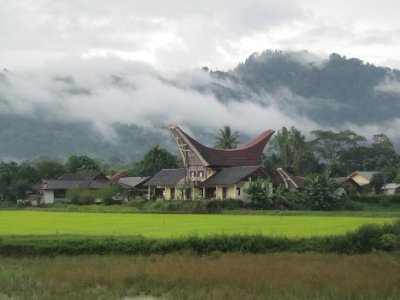 At a later stage I will add more photos and videos of the slaughters but for the moment it is taking a long time to load them.

Posted by Rraven 18:37 Archived in Indonesia

Previous Next Table of contents

This blog requires you to be a logged in member of Travellerspoint to place comments.

If you aren't a member of Travellerspoint yet, you can join for free.